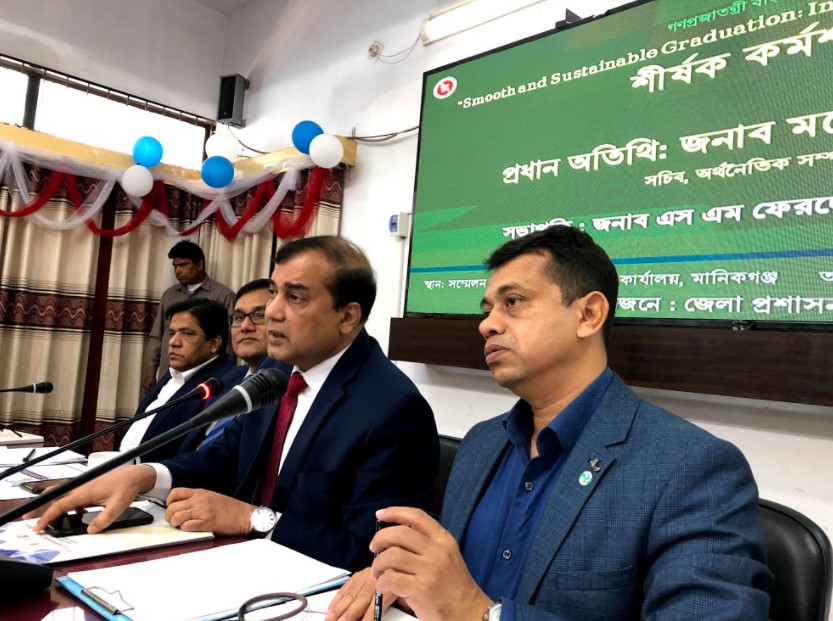 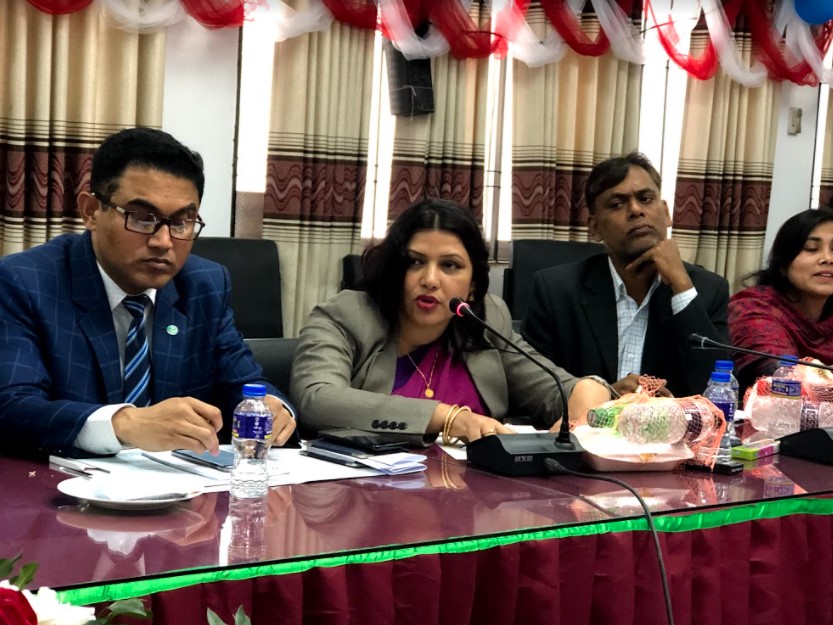 Speakers at a workshop in Manikganj has called for the construction of the second Padma river to boost the regional connectivity and to provide a much-needed impetus to the development of adjacent districts.

Simultaneously, they also called for establishing several economic zones and improving the railway connectivity of Manikganj with the rest of the country to accelerate industrialization in the district.

Their views came at a workshop on “Smooth and Sustainable Graduation: Integrating Local Institutions” organized on 07 February 2020 at the Deputy Commissioner’s Office in Manikganj.

Representatives from local administration, civil society organizations, local level government departments and other officials of the project participated in the program.

Speaking on the occasion, the then ERD Secretary Mr. Monowar Ahmed said that under the visionary leadership of the Honorable Prime Minister Sheikh Hasina, Bangladesh had succeeded to formally meet all the three criteria for graduation back in March 2018.

He, however, pointed out that to make this momentum sustainable—it is crucial to make the development process participatory and inclusive.

In this context, he opined that organizing such local workshops on sustainable graduation would help the government in addressing the local level challenges and potentials and ensuring sustainable development.

Mr. Ahmed also opined that such inclusive local level engagement is imperative to implement the government’s “My Village My Town” scheme.

Deputy Commissioner of Manikganj Mr. SM Ferdous highlighted on various development initiatives of the local administration for the welfare of the common people of the district.

He informed that the district administration is currently working to integrate the activities of every local organizations and entities with the SDGs.

He also hoped that organizing such local level workshops would contribute to increased mass awareness about the graduation related issues at the local level.

Joint Secretary and the then Project Director of the Support to Sustainable Graduation Project Mr. Abdul Baki in his speech said that Bangladesh, under the valiant leadership of the Honorable Prime Minister Sheikh Hasina, has turned into one of the fastest growing economies and has achieved one of the highest GDP growth rates in the world.

Joint Secretary and the then Deputy Project Director of Sustainable Graduation Project Mr. Md. Rezaul Bashar Siddique, in his speech, observed that organizing such workshops would help the government in preparing the transition strategy that would chalk out the way for sustainable graduation.

He also highlighted the opportunities offered by graduation as well as on the ways of making the graduation process sustainable.

Discussants at the workshop observed that Manikhganj has huge untapped potentials for river-based tourism, agro-processing industries and solar energy.

Later, the participants of the workshop were divided into three groups for in depth group discussion based on the following questions:

Through their group discussion, the following recommendations came out:

Awareness raising and participation of the common people is imperative to make any development process inclusive and sustainable. From that view, a series of such workshops or seminars are also being organized by ERD in recent times with support from the Support to Sustainable Graduation Project.

The main objective of these workshops is to raise awareness about the LDC Graduation process at the grassroot level and to prepare the local stakeholders, government agencies, civil society organizations as well as the younger generation for the future development paradigms of the country.

Economic Relations Division is compiling the recommendations coming from such local workshops which will later be forwarded to the relevant government ministries.