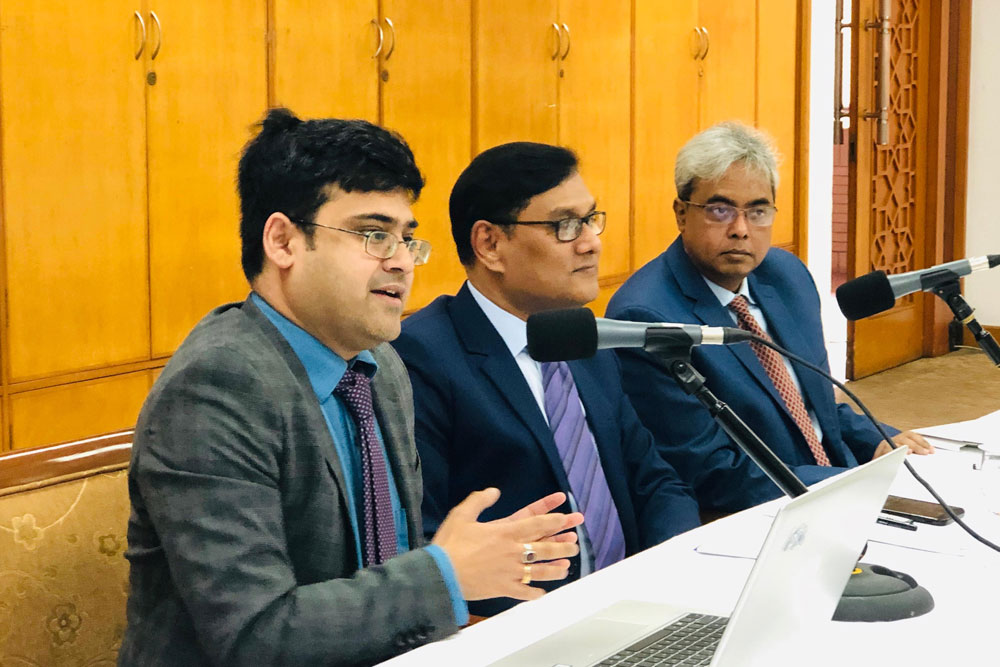 Mr. Nirmalya Syam from Geneva based think tank South Center delivers a keynote presentation during the workshop on “Possible Impact of LDC Graduation on the Pharmaceutical Industry and Way Forward”. The then Project Director of SSGP Mr. Abdul Baki and Component Manager of SSGP Mr. Md. Anwar Hossain are also seen. 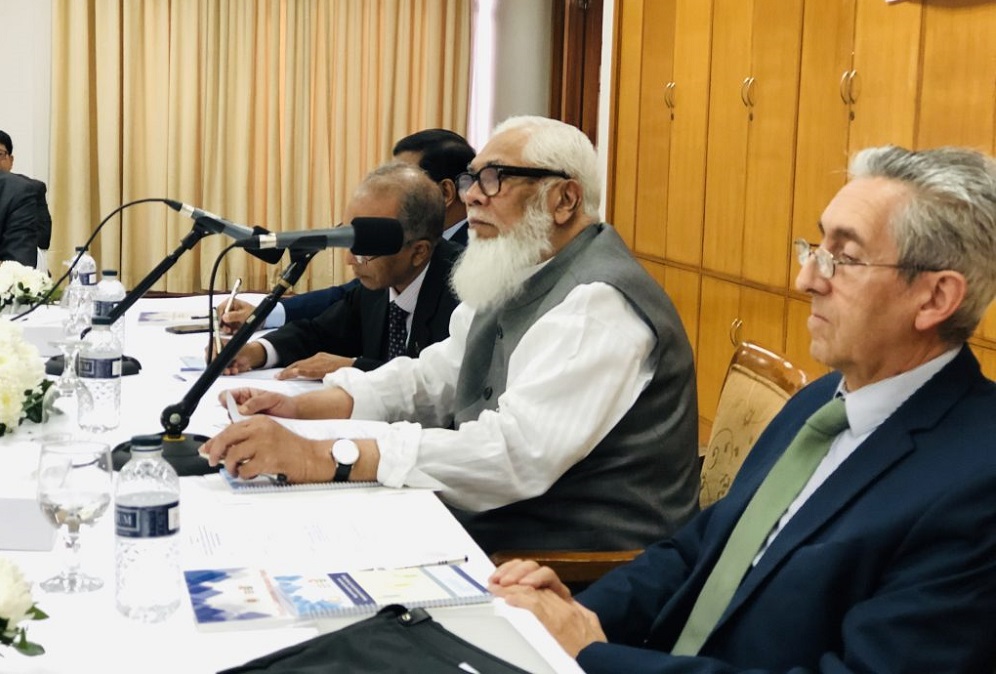 Hon’ble Adviser to the Prime Minister for Private Industry & Investment Mr. Salman F. Rahman speaks during the inaugural session of the workshop on “Possible Impact of LDC Graduation on the Pharmaceutical Industry and Way Forward” organized by Support to Sustainable Graduation Project (SSGP).

Bangladesh should ask the World Trade Organization for extending the TRIPS transition period relating to pharmaceutical products for graduating LDCs up until 2033, a recent study report has suggested.

At the same time, the existing patent law of the country should be updated to incorporate all the public health related flexibilities available under the TRIPS Agreement—the study has recommended.

Geneva based think tank South Center has conducted the research under the auspices of “Support to Sustainable Graduation Project (SSGP)” of the Economic Relations Division.

The findings of the research were shared during a workshop on “Possible Impact of LDC Graduation on the Pharmaceutical Industry and Way Forward” held in Dhaka on 09 February 2020.

High officials from the relevant government ministries, representatives from the pharmaceutical industry, think tanks and other relevant bodies attended the daylong workshop.

The aforementioned study is being conducted at a time when Bangladesh has successfully met all the three criteria for LDC graduation in the triennial review of the Committee for Development Policy of the United Nations in 2018.

In the current trend it is expected that Bangladesh will meet the graduation criteria for the stipulated second time in the next triennial review to be held in 2021, which will lead Bangladesh to graduate from the LDC status in 2024.

However, there are some concerns that upon graduation in 2024, Bangladesh will no longer be entitled to enjoy the LDC-specific International Support Measures (ISMs), including the (TRIPS) transition period relating to pharmaceutical products.

Concluded in 1994 during the establishment of the WTO, the Trade-Related Aspects of Intellectual Property Rights (TRIPS) agreement sets global minimum standards for the protection of intellectual property rights (IPRs).

All the member states of the global trade body, the WTO, are obliged to comply with the TRIPS agreement.

However, the LDCs were granted a transition period to comply with the agreement which has been extended until July 01, 2021 for the IPRs in general and January 01, 2033 for pharmaceutical products.

In this context, Economic Relations Division requested the Geneva based South Centre to conduct the study to assess the probable impacts of the loss of TRIPS transition period relating to pharmaceutical products for Bangladesh after the graduation.

Accordingly, the South Centre conducted a study titled “The Loss of the LDC Transition Period for Pharmaceutical Products Under the TRIPS Agreement Upon LDC Graduation: Implications for Bangladesh” on the basis of Key Informant Interview (KII) and submitted a draft report which was shared during the aforementioned workshop.

The Loss of the LDC Transition Period for Pharmaceutical Products Under the TRIPS Agreement Upon LDC Graduation: Implications for Bangladesh 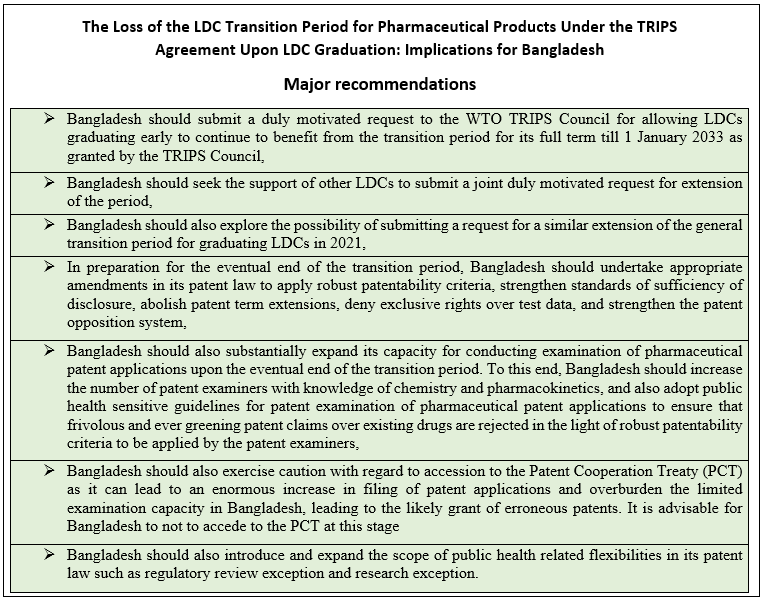 The study observed that the pharmaceutical industry in Bangladesh has achieved remarkable progress over the years thanks to various policy measures which encouraged local production of medicines. The industry meets about 97% of the local demand and also exports medicines to a large number of countries including to regulated markets in Europe and USA.

Most importantly, the prices of locally produced medicines are affordable—the report noted; while attributing it to the absence of patent protection, thanks to which, there is no need to pay any royalty to the patent holder even if the medicine is patented outside Bangladesh.

However, after the expiry of the transition period upon the graduation of Bangladesh in 2024, providing patent protection to pharmaceutical products will become mandatory. As a result, the price of medicines will be increased due to the payment of royalties to the patent holders—the research paper observed.

In addition, absence of competition in patented regime due to exclusive rights of production only by the industries permitted by the patent holders will also raise the prices of medicines—it added.

In this context, the report called for submitting a duly motivated request to the WTO TRIPS Council for allowing the graduating LDCs to benefit from the transition period for its full term till 1 January 2033.

Bangladesh should also seek the support of other LDCs to submit a joint duly motivated request for extension of the period—experts from the South Center suggested.

The report also pointed out that although remarkable progress has been made in formulation manufacturing, Bangladesh is still lagging far behind in the manufacturing of Active Pharmaceutical Ingredients (API).

This is a major constraint for the industry and developing API manufacturing capacity is essential for Bangladesh to continue the growth of the industry—the study said.

The report also observed that the Patentability criteria under Bangladesh’s existing age-old Patent Law is weak. The term of patent, under this law, is 16 years while as per the TRIPS requirement, it should be minimum 20 years—it pointed out.

In this context, the report has suggested to update the law or enact a new law with appropriate and strong provisions, particularly for the interest of public health.

Nirmalya Syam from South Center delivered two keynote presentations on the findings of the study. Executive Director of the South Centre Professor Carlos M. Correa also spoke during the event.

The SSGP of ERD has already prepared a policy brief based on the recommendations of the study as well as the observations coming from the workshop participants which will be shared with the relevant government ministries, regulatory bodies and other stakeholders.