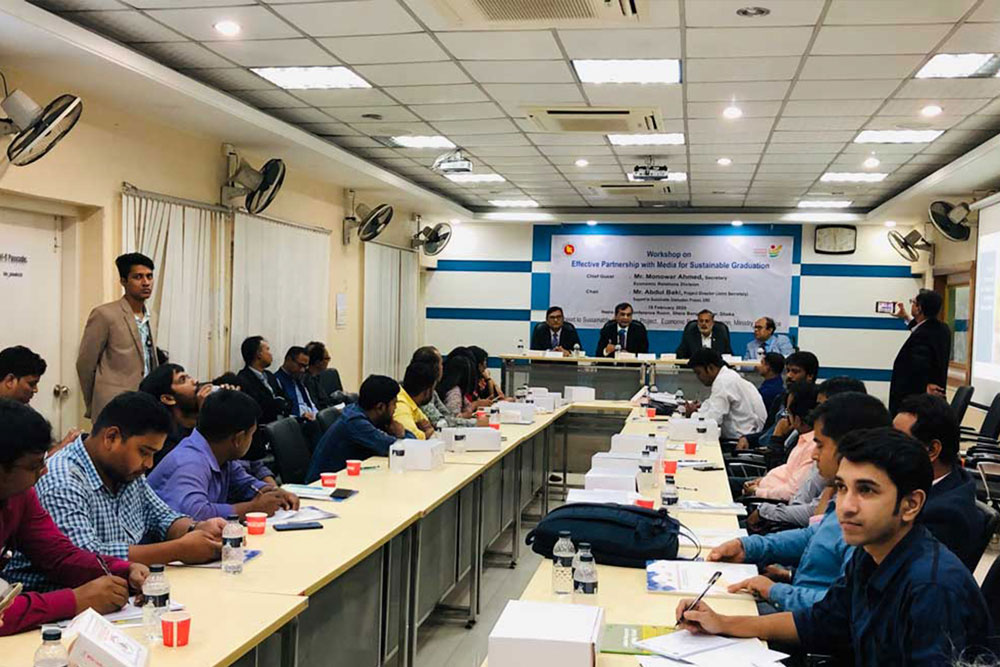 Speakers at a workshop in the capital recently has opined that media can play a very constructive role in creating a positive mindset about graduation among the relevant stakeholders and the general people.

In this context, they called for continuous dialogue and knowledge sharing among the policymakers and the media community regarding graduation and other development dynamics.

The then ERD Secretary Mr. Monowar Ahmed attended the workshop as Chief Guest while the then Project Director of SSGP Mr. Abdul Baki chaired the event.

Journalists from the country’s top media houses participated in the event.

Dignitaries and participants at the event opined that graduation from the Least Developed Country status will usher new opportunities for Bangladesh.

It would result in better country image; self-reliance and self-dignity at the global stage; better credit rating for the country and wider credit access to the global financial market, they said.

Speakers at the event also opined that Bangladesh should move to sign Free Trade Agreements (FTAs) with potential and suitable partner countries in the aftermath of graduation.

The country has already made some headway in this regard and it is already in talks with some neighbouring countries like Nepal, Thailand, Malaysia and Sri Lanka for signing of FTAs.

He also highlighted on various steps taken by the government to make this graduation process smooth and sustainable.

In doing so, he mentioned that the government had already formed a taskforce to steer the country’s graduation journey.

He also mentioned that ERD had initiated the ‘Support to Sustainable Graduation Project’ to provide necessary secretarial, technical and advisory support to the government in this ongoing graduation process.

The ERD Secretary also noted that the government, with the help of the SSGP, is lobbying at the international level for the continuation of international support measures for the LDCs even after their graduation.

Advisor of the Support to Sustainable Graduation Project and Former Senior Secretary of ERD Mr. Kazi Shofiqul Azam termed Bangladesh’s meeting of the graduation criteria as one of the country’s biggest achievements in recent decades.

Nevertheless, he also emphasized on the graduation of mindset to make this process sustainable. In this context, he asked for active cooperation of the media community.

Joint Secretary and the then Project Director of SSGP Mr. Abdul Baki put thrust on continuous dialogues with various stakeholders including the media to make the graduation process smooth and effective.

ERD Wing Chief and the current Project Director of SSGP Mr. Farid Aziz in his remarks observed that to make the country’s graduation process smooth and sustainable, it is essential to carry out regular dialogues and knowledge sharing with various stakeholders including the media representatives.

In this context, he opined that the workshops like this are quite timely and effective. He also expressed his hope that such interaction with the journalists on the sustainable graduation issue will be continued in the future.

Joint Secretary Mr. Anwar Hossain, in his keynote presentation argued that LDC Graduation will have almost no impact on the country’s foreign assistance flows– rather enhanced creditworthiness due to graduation might increase the flow.

Officials from ERD and Support to Sustainable Graduation Project also spoke during the occasion.